As it has become a tradition, the Trout Union Cup fishing definitely cannot be called simple…

If the river is understandable and "readable", the strongest teams of the world can go to the gap from the rest simply because they have earned a high level of skill. And beginners have a chance only if someone from the "grandees" and "masters" make mistakes. Well, if someone is very lucky.

If the river presents surprises (usual thing for the Trout Union Cup), the "grandees" still perform very well. But ... for a number of newcomers and teams, not so experienced and without a rich history of victories, there is a much more serious chance to rise higher in the standings. And then take prizes.

And if instead of the river one has to choose a flowing reservoir, that is, to switch abruptly from "stream" to "area" fishing? Then the non-standard thinking, the pragmatic approach and the factor "the beginners are lucky" can play into hands of teams, which were not treated by many as favorites. As well as success can bring "banal", "simple" in the opinion of some fishermen, but at the same time perfectly working baits and ways to present them.

Let’s recall: the first day of the Trout Union Cup 2017 Czech Republic was held on a small pond - a small reservoir. It was held by the standard rules of shore fishing, adopted in the conduct of international competitions.

Yes, the forced transfer of the place was not an easy decision, but the only true of the organizers.

Yes, not all trout fishermen from 13 countries were ready to catch in new conditions.

Yes, the water in the reservoir was much less clean than expected.

And, of course, the struggle and its results were, under such factors, hardly predictable.

Many expected that the trout will leave the coast and will take "only at long and long distances." Of course, many fishermen took out fish from afar, for example the sportsman from Moldova Valeri Negru performed well, becoming the 4th in the zone thanks to catching at a long distance. The river Bečva, incidentally, is also quite wide, and many athletes were ready for a long distance if the tournament was on the river.

But at the same time, a lot of fishermen caught, as they say, "underfoot." There were also those who steadily got trout from an average distance. Someone was fishing with soft plastic baits, but at the same time the famous master of such way - Alexander Vorobyov - caught trout with spinners well.

The top three in the team classification is as follows:

For Slovak and Czech sportsmen, a good and fairly smooth performance on such a "home" water body was predicted by many fishermen.

But of Hungarian colleagues, no one expected such a "jerk". And, probably, even they by themselves did not expect so many good performances on the first day. The Hungarian sportsmen frankly admitted themselves that the chances of getting ahead, be competitions on the river, were minimal.

But the change of the competition place because of the cataclysm gave them such an opportunity. By the way, they caught, not much philosophizing, using such lures - mostly with bright spinners and simple retrieve.

And maybe, the support influenced? After all, there was only one comment on the publication in the morning before the competitions photos of the city with good weather... «HAJRÁ MAGYAROK !!!». What can be translated as "Forward, Hungarians !!!!"

The distribution of points in the top five teams is quite dense:

The second day of the competition will put everything on its place. But already, at least, it is clear that the Game will be very tense and the leaders will go very close to each other.

Results of 1st Day are in attachred pictures in gallery. 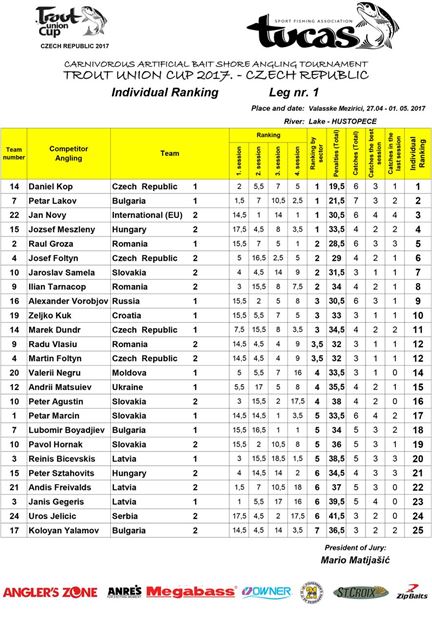 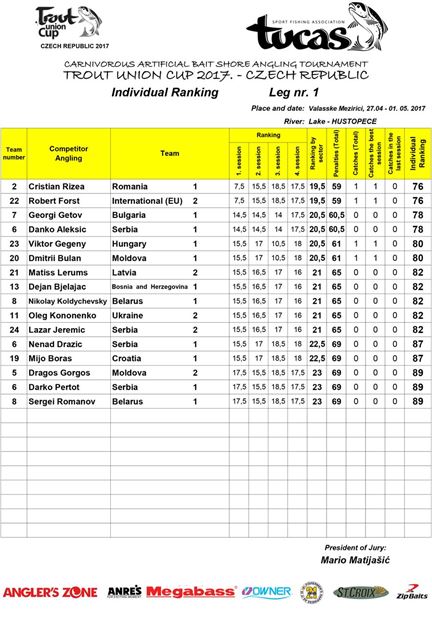