My Story About Bass Fishing in Croatia Part 2 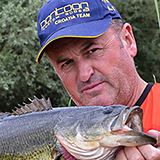 How to Get a Perfect Bait

In order to find a perfect bait you need to know the waters in which the fish is living. Because of diverse diet, there are few types of bait you can use for bass. Various small fish that bass prefers are mostly elusive because of their speed. Also, that number is usually not enough for bass stomach, forcing the fish to search for something more accessible and slower. Bass will eat anything alive and small enough to swallow. Juvenile fish of all kinds is its basic food, but the fish is also likely to eat crabs and to dig out snails, small shells and other organisms from the ground. Water insects and its larvae are, along with other insects who reside on water surface, real delicacy for basses. Bass is also a big fan of frogs and tadpoles. Snakes are also a part of its diet, even the venomous ones. Despite the fact that bass in Croatia can be found in a limited area, waters have its specifics and grabber is creative in every one of them. Only by experience and knowledge about the life in particular waters you are able to solve out the mystery of bass's favourite menu. Because of its season diet during the summer, the best thing to do is to offer the bass something that resembles a living fish. During the spring, tadpoles are the best choice. As for the autumn, you can try with invertebrates and crabs. Every bait that resembles the look of a food that belongs to the bass's diet can be used for a catch. Wobblers are, as the most compact fake baits, the most lethal baits for bass. All shapes can be used (elongated or pear-shaped), types, top – water, shallow, medium deep and deep – crank, also the swiming and sinking models. With the good knowledge of action of wobblers, you are able to cover up all the situations in the water with around 10 of them. Bass jigs with visors, made of natural or artificial materials, are also efficient for bottom fishing. During the difficult conditions because of grassed terrains, we can use various combinations of wobblers with visors or silicone baits with protected hook. Also, good choice are buzz bait and spinner bait. During the bass' minor activities, we are using various imitations of life - baits made of plastic with the common name of worms. What these lobworms, snails, crabs, snakes, lizards, frogs and other handicrafts have in common is special montage where the top of the hook stays in the body, avoiding various impediments and ensuring the „clear“ arrival to basses, even when their surrounding environment consist of grass, water lilies and branches.

Of course, the bass is also likely to be caught with a classical bait, owned by every fisherman. Those are butterflies, smaller spoons, twisters, castmasters and other arsenal. We should also mention wet and dry flies, made of artificial materials, along with other imitations of insects.

The artificial bait diversity of this kind represents incredible accumulation of fishing tackle every serious fisherman should know. This is not a trend – it's a need. The days when bass was willing to take every available bait had passed. Therefore, it's really hard to select the necessary group, kind, type, size and color of fake bait and fishing technique. Bass is always behaving differently, despite the same enviromental conditions. Time of the day, year, air pressure and type of the water should be also taken into account. The diversity of fake baits represents the biggest problem and brings a great amount of confusion, especially when you think about various ways of retrieve and presentation. While catching bass, the real advice is that you recollect all the knowledge about lures. Bass fishing demands a completely different approach. The best thing to do is to offer fish its favourite local diet. To find out what the fish likes best of all, look out in the water. If there're no visible signs, you need to look for another solution.

A light and if it's possible two-piece spinning rod (length of 2,70 cm maximum, throw weight of maximum 40 or 50 g, with roller you own) is enough for bass fishing. The reel with capacity of 100 m/0.25 mm, braided line 6 and 8 lb thick and nylon with the diameter of 0.22 - 0.25 are suitable for the rod of this kind. You may even use nylon thinner than 20 mm if the rod or reel supports it. Nylon with the diameter of 0,25 mm (max) is enough for ensuring comfortable fishing experience. Stronger equipment should be used during the summer and early autumn when the water grass reaches its maximum. Short-termed ''fights'' in grassed areas demand strength and intensity. To tame bass over 1 kilogram, you need to constantly press the fish with strong rod with actions of 50 g max. A stronger tackle is welcome because of big pikes that live in this area.

I won't be writing about the fishing technique because I have already said everything. Every person should decide for himself/herself how to present himself or herself on water and what bait he or she should choose. It highly depends on season and weather conditions.

Many factors influence such a different and unexpected behavior of the bass in similar situations. Bass belongs to a new species of fish in the area, which caused difficulties in studying the fish, but the progress is evident. The most important thing in searching for bass is its temporal habits, irrespective of the course of the day or year. Its yearly habits are formed by the the need of the fish in a comfortable habitat, meaning most comfortable temperature of the water. The vast supply of food could be reached on the surface and the fish is usually there to hunt. Smaller fish and other small creatures are easily visible because of wave making, enabling bass to hunt more accurately. The temperature of water is falling in the autumn, which forces bass to go deeper where the fish stays from November till March.Exceptions are not possible during the winter and the fish stays in the warmest part of water. During bad or extremely hot weather, bass is likely to hunt at the bottom even during the summer.

During spring, not only could the fish be seen at the bottom but also in shallow waters because of faster heating. During the two short periods through the year the fish is hunting in all layers of the water. It is happening during the even water temperature - 16 to 18°C. We are here talking about the second half of May, the very ending of August and the beginning of September. Unlike the vertical yearly shifts, the bass's daily shifts are horizontal and focused on food. The water lily fields and grassed water parts are fish's daily home. Reducing of the sun rays angle is forcing the fish to come close to the shore and to use grass as a shelter. Also, the fish is intensively searching food and prepearing for departure in free waters, where the hunt is continuing during the night. The bass returns to grassed parts of water in the late afternoon the next day, when the water plants – stimulated by the sun activity - start to produce oxygen. At night, the water plants are producing carbon dioxide, which forces bass to leave that area. If you're looking for the bass in this area, avoid ''monotonous'' parts, such as bays and sudden narrowings - they are always followed by depth increase. Favourite hunt locations of this fish are the result of any violation of grassed area: cleaned parts for white fish hunt, branches and bays and peninsulas in water lily fields.

The presence of water plants is attracting the presence of other water and terrestrial organisms, giving them the necessary shelter and food. The bass is also attracted by the great amount of hutchlings, snails, crabs, lobworms and insects, meaning that the fish is likely to be found in the area where the mentioned organisms are living. Inequality in bass concentration is characteristic for described areas. 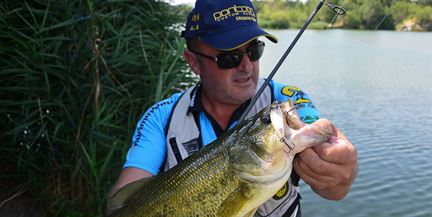 Bass's catching on a wobbler 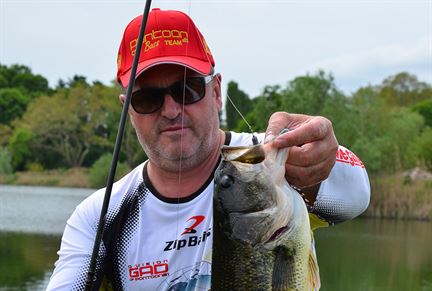 catching of a bass fishing 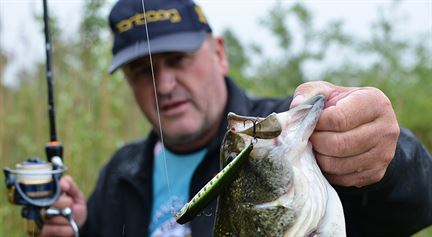 as it is correct to catch Bass

Bass on a wobblers
Language: