The following day we were planning to go fishing for trout in the so-called beavers’ lodges. It is this fishing that turned out to be the most unusual and interesting. Imagine a meadow stream which can’t even be seen in grass. It may seem that someone is just fishing in a field. But in fact, there IS a river, a quite a deep one. Trout are comfortable in such places. They feel protected there. And not in vain. It is not always possible to approach the river unnoticed and reach water with a lure. Besides additional, quite frightening movements, a very grassy bank doesn’t allow to cast a lure, you had to literally push it through the grass.

But stream fishing comes together with the main program. We were awfully interested in the beaver’s lodge not in the stream itself. All large trout are said to leave up the river, above the beaver’s house, on the spate out there. But fishing there was not that simple either. And I didn’t manage to hook a single trout that day. The fish attacked my lure several times, but I didn’t manage to hook it. And what I did was no more than 300 grams.

Such a cautious fish in such limited space requires a certain approach. In the mountain river due to a fast noisy stream, stones, etc. fish get cautious quite rarely, here they here and see everything, especially, in the vast territory of the beaver’s house. In this situation you need to approach the place unnoticed (which is not that simple), but the main thing is to make a quiet accurate cast, but it doesn’t guarantee you’ll hook the fish. At the last minute it might get cautious once again and the attack will be blank. And to catch such a fish on one and the same day will be absolutely impossible, no matter what lure or type of retrieve you choose. It doesn’t come out at all. And you know for sure that it is there, there’s nowhere for it to go, despite your desire to try different lures or experiment with retrieves, the right decision would be to change the place.

No matter how accurate your casts be, catches are inevitable, you could catch on a branch on the bank, sometimes you can make a longer cast than you actually need, etc. To fish in such thick grass, bushes and snags I made use of one trick which enabled me to save some lures, nerves and time. While fishing with a classic thin monofil you should either tear off the lure every other time, or scrape through the bushes to get it. All this scares fish and wastes your time. A thick braided line drastically solver the problem. You can solve all the problems with caches thanks to its strength. The decision is blunt, but everything works.

If you don’t want to scare fish with a braided line, a 1-meter leader will be enough. I used Pontoon21 Marxman HFC fluorocarbon. Fish can’t notice it, more importantly it is abrasion resistant, and as you know, shells and snags are in abundance here.

Around beaver’s lodge I used Pontoon21 High Point Stylo SL682XUL-M rod, which, to my mind, is universal if you go fishing for trout in different conditions. Though, probably, a longer spinning rod in such difficult conditions would be more suitable to make a wrist cast or a pendular one. These are two types of trout fishing. At the first one it’s more comfortable to walk along the stream and make accurate casts with a shorter rod, at the second one it’s much easier to cast the lure through tall grass and bushes with a long rod.

Out of lures DUO Toto 42SP was the best one. Though in such conditions the local anglers use the tiniest cranks, retrieving them so that they were leaving feelers on the surface. I tried, it didn’t work, so I caught most of my haul with DUO Toto.

We didn’t refuse the opportunity to fish in this legendary place, moreover, there was news that it bites there. Having covered the distance of 350 km moving from one part of Lithuania to the other, we turned up the port city of Klaipeda on the board of a big boat. After ultra-light rods now we are holding powerful jigging ones Pontoon21 Seven&Eleven SES7115XF и ANRE'S / PALMS Molla MGC-73MH2F and a resolution to catch a pikeperch.

As we were told, the stream comes form the side of the sea, which means that the pikeperch have started biting. In fact, a great number of boats in one place spoke volumes. There were approximately 50 of them in staggered rows. At the same time there were small boats maneuvering among them, with people fishing vertically from them.

Due to a stronger stream the underwater life is very active near the mouth of the bay. Some forage for hutchlings must be raising from the bottom, pikeperch in their turn hunt for them. The most popular rig most anglers are using is some kind of a terminal rig. But instead of classic sinker they use a jig head with a shad or a twister. And as a lure they often use a prolonged slug that imitates a certain fish “tobis” – a favorite delicacy of pikeperch. Sometimes pikeperch react to jig head rather better, sometimes to the lure on a leader. But this variant of a rig is not angling-like. From time to time, on principle I used classical jig or a simple terminal rig with a hookless sinker.

Terminal rig for pikeperch from Klaipeda

It is very similar to a familiar terminal rig for perch. Though the weight of sinkers ranged from 1 to three ounces (28-84 g), and the size of lures – from 3 to 6 inches. The place wasn’t very deep – 5-9 meters, but the stream was very strong. That’s why I had to use such heavy sinkers.

Once after messing around in swamps and bushes I didn’t manage to change my strategy and adapt to such a heavy tackle. There were some bites, I even caught a perch, but pikeperch was still evading me. Though my Lithuanian colleagues were luckier. They were more confident in their business. One of the fishes was nearly 2,5 kilos, which is considered to be a great result in the neighborhood, its average size being 1 kilo, as a rule.

To my own surprise, I didn’t manage to get it quickly. At first sight – nothing difficult, everyone is doing the same thing, but there are some subtleties in the manner of retrieves that I couldn’t crack. And that was one more reason for to return there once again, this time prepared and get even. Honestly, I even wanted to come back the following day, I was so shocked at the fact that I didn’t catch local pikeperch for the whole day. But our friends and some other news were assuring us that the wind calmed down, the stream died away and pikeperch disappeared.

Trying to catch an elusive pikeperch that stopped biting according to the local folk made no sense. If I had been alone, I would have stayed. But we were a team. After a short discussion we decided to return to Vilnius and began considering some variants of fishing. Either we would try our luck in the river Neris hoping to see salmon, or on our way home we would try some trout streams or beavers’ lodges. We were all exhausted. And light in terms of travelling salmon fishing was more tempting. But the probability to succeed was not that high, and as the famous proverb says, “a bird in the hand is worth two in the bush”. That’s why I insisted on getting deeper into the Lithuanian wilderness with its swamps, bushes, beavers’ lodges and breast-high grass.

I won’t go into details about my travelling around small rivers and streams. I like it very much, but one can’t express all the beauty with words. I’ll only say that in the end I saw a trout weighing more than 1 kilo, which appeared from under the blockage and attacked my DUO Spearhead Ryuki 50F. But alas, after just one second when the friction rang the contact was lost. One more trout of 500 grams was poor consolation for the unhooking. It’s not a great result. But the most valuable for me was that I had an opportunity to hunt for this fish in such unusual conditions. Ditch water, silty bottom, duckweed, blockages and snags, I couldn’t imagine that trout, and large trout, might inhabit such places.

Closer to the evening, we visited one more stream of a different type. It was flowing in the field was open for casts and change of positions. As it turned out, trout were in abundance there. Fishing there was a prize for all the difficulties. I relieved my feelings there. The main lure was the same DUO Toto 42SP. And due to its being active and a great number of fish, I managed to experiment with others too. Cranks (as the local anglers insisted) were very effective, and the main thing was that such fishing was spectacular. I used Pontoon21 Hypnose SSR from a new color set, retrieving it so that it were spreading its feelers over the surface. Trout willingly came out of very distant shelters, attacking the lure from the surface as the chub often do.

The following experiments led to a new micro-spoon by Pontoon 21. More precisely, it’s a well-known 3D Spoons series but smaller. I even used a 4-gram Sintura, and I didn’t take it off. If only I had used them before. It worked just perfectly both at upstream retrieves and pauses.

Having waders on me and using upstream retrieve for a start with this spoon, not a single retrieve went out without biting. Finally, after all my trips, having fished to my heart content, I could safely go home.

In conclusion I would like to express my gratitude to all those people who helped us in that trip. But for them we wouldn’t have even a small fraction of all our adventures. 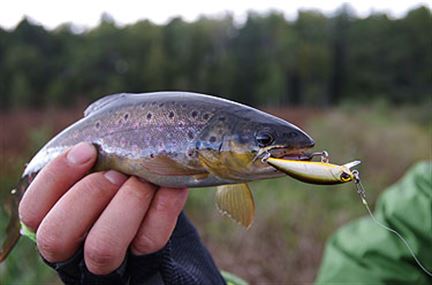 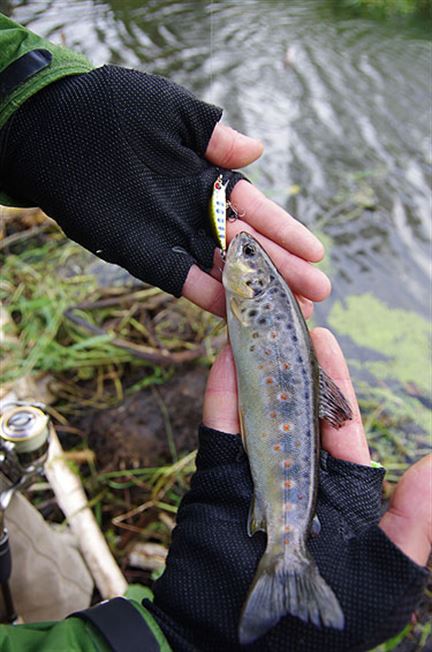 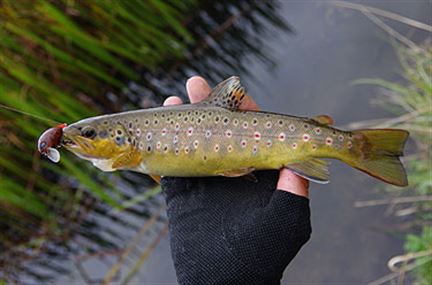 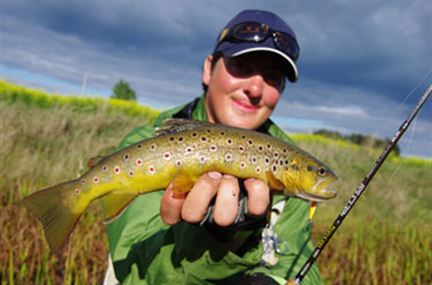