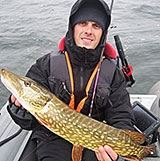 - Silver prize-winner Championship of Republic of Belarus of 2014,

-Winners of the Championship of Republic of Belarus of 2016,

This review will touch upon two Pontoon21 Vibration lures at once – Bet-A Vib and Kalikana Vib. Moreover, we’ll talk about their tine modifications. In 2107 I wrote about Bet-A Vib 61 and my first impressions after the season. Now it’s time I made it complete.

Some time after Bet-A Vib 61 and Kalikana Vib 65 had appeared in fishing shops, the company made the line bigger, having added to it the following models:

Each of them comes in two variants – the silent one and a noisy one with Nano Sound system inside.

I’d like to remind you that originally these lures were designed as winter ones for ice fishing. But while being tested, they showed amazing results and brought a lot fish when one used a spinning rod. When this set was extended, it came of great use for fishermen in winter. Thanks to their smaller modifications it was possible to work in shallow parts of ponds. Also it gave an opportunity to find a “key” for the predator’s mood by replacing heavy lures with light and tiny ones.

For those who like spinning rods lighter lures made their field of application wider. It’s wise to use Bet-A Vib 61 or Kalikana Vib 65 in drop-offs 2-3 meters deep where there’re a lot of highly active perch and pike in summer. If you animate the lure quite sharply and hit the bottom with it, it will attract the lure from afar. But in practice it doesn’t happen often. It’d be more correct to say that it is not very often that an average fisherman happens to be in suitable conditions. More often than not one will have to select the necessary size, weight and animation. And with domestic ponds being highly popular with fishermen, biting doesn’t become any better. Here our babies will help us out.

But it is not always that one manages to find a place where trophy perch, zander or pike stay at this time of the year. That’s why I don’t think it to be shameful to fish for a lot of small perch instead of standing at one point, waiting for something.

Someone will ask a reasonable question: why vibs? Why not silicone? Sometimes when it’s very hot in summer, and sometimes in autumn too, fish refuse to bite at silicone lures though you can clearly see in the echo sounder that there’re a lot of predator near hatchling. Or it does bite but the number of them is much lower that with vibs. We even tried classical equipment with jigheads or terminal rig and drop shot, fish may bite and you may catch something, but the efficiency is not even. On the whole, even if they bite well at the silicone, the same type of fishing for the whole day is just very boring.

In clean places where you can’t catch on anything, I prefer to use vibs, cicadas and pilkers rather than just jigs. Even if the number of bites is the same, it may still be useful. You took off the silicone fish and it may seem that the spot is empty. But you can catch with a vib just a couple more.

Some of our trips may serve as a proof. The windy weather “blew away” the hatchling, and the fish didn’t turn up in their usual places. But near the surf-beaten shore where all the small fish had been sent to, there were perch of different size in large numbers. In spite of predator being present in the area they seemed to have lost interest for the lure. You catch 3-4 perches but then there’s nothing on the hook, some weak biting and finally silence. Then you change it for the lure of a different modification, color, weight and level of noise, and everything starts over again. You catch fish, then they only bite, in the end just nuzzle it. One always needs to change the lure and adapt to the constantly changing mood of the predator. Besides the retrieve, animation and noise chamber, Bet-A Vib and Kalikana Vib are notable for their characteristic action in water. While Bet-A Vib is more relaxed and calm, Kalikana Vib is more sharp and aggressive. And anyway you slice it there you have another box of some necessary lures. Their reasonable prices allow us to do it. Fishing is attractive for its opportunity to experiment as far as methods and techniques are concerned, that’s why they will never bore you, at least, not me.

P.S. The most memorable moment was that the largest perch, weighing roughly 500 g, was caught with the smallest Bet-A Vib 48, silent version weighing 5,6 g.

A few words about retrieves. The more you use lures, the more difficult it is to talk about them. Two basic ones – jerking and straight. The rest is done by way of practice. When there’s biting, you’ll understand everything yourself. Look at the echo sounder and cast the lure to the water level where the fish are at the moment. 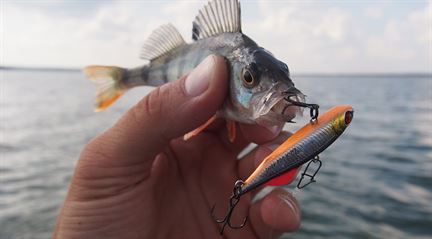 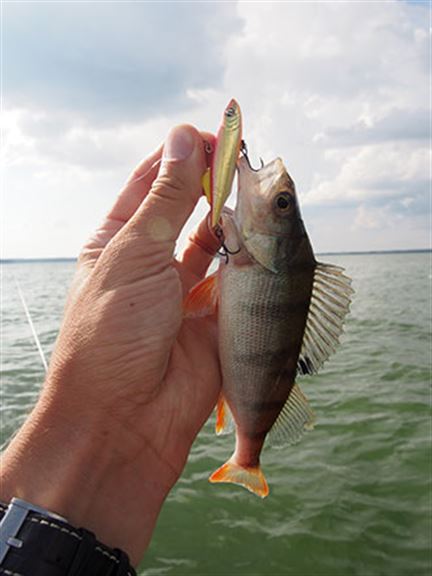 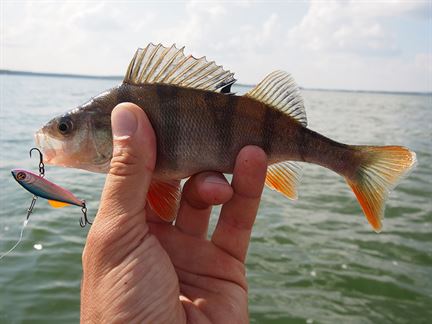