Bet-A series and its neighbors

The history of Bet-A series started a couple of years ago.

When I received the first received the first pre-production lures of the future Pontoon21 Bet-A series – Bet-A Shads in order to test them. I was literally taken aback by the action of the device at my fist fishing – I’ve never had anything like that!

At a straight retrieval the shad badly deviated from the horizontal axis and literally lay down on the surface with its wide sides, at jerking it often moved from side to side, gleaming a bit.

The color of the preproduction model was brown, that’s why the shad resembled young crucian carp.

And it perfectly appealed to pike! Though why appealed? It still attracts it! What colors!

But Pontoon21 designers didn’t stop at that, but continued developing Bet-A and Kalikana series (the latter one has almost the same function but different action)

On the basis of Bet-A-Shad several types of lures appeared in the new series – Bet-A-Shiner and Bet-A-Minnow, which I happened to test before standard models came out.

Siberian anglers use a special term – chebak. It is used to denote small silver fishes. They don’t distinguish roach, bleak, small ide or dace… everything is called chebak. Americans have something like that too – Shiner, this word is used to call local species of carps of a small size. More than that, they also have shiner perch.

That means that Shiner form is somewhere in between minnows and shads. Now we understand engineers’ plan: there are several types of lures created for different conditions which are able to replace each other in difficult moments. Kalikana model is now 91 mm long and the thinner model got several sizes – Kalikana Dun.

The main conditions which Bet-A and Kalikana Dun were made for are shallow waters. Moreover, it doesn’t really matter for any of these lures mentioned in this article whether this is a fast stream or a ditch water pond. They work everywhere!

The working level of Bet-A series is about 0,5 m., the one of Kalikana is up to 1 meter (105 mm and 95 mm models). While fishing in Moscow region I noticed one peculiarity. Almost all the time all shallow runners “outrun” shallow poppers and walkers even in the most typical conditions for the latter. But the trouble is that until recently all the lures which are able to swim at a depth of several centimeters under the surface were mainly floating. That’s why it was quite difficult to make them suspend under the very surface. Pontoon21 solved that problem by creating Bet-A series. The suspending Bet-A-Minnow SP, Bet-A-Shiner SP, Bet-A- Shad SP models can be presented with the help of jerking technique (the pause of 2-3 seconds) at a depth equal to 2-3 widths of their bodies. By the way, the floating versions of the lures are moderately floating.

There’re other smaller sizes in Bet-A series: Tantalisa, Pacer and semishad Cheeky. But the first ones are at a disadvantage in comparison with series in terms of casting, and Cheeky is distinctly floating. Well, the lures we look at today took their well-deserved places in Pontoon21 model set.

I would like to point out specifically this detail, because this is a frequent subject in different Internet Chat rooms. Currently, it is produced from fiberglass, 0,8 mm thick (picture 3). It is used quite often in lure production. Its durability is more than enough for fishing without any additional manipulations. I tested it on fidgety pike, when I gripped them with the help of pliers, bending it to the very edge, because thus the ultimate current of power is created. (picture 4)

The balance system of Bet-A models is practically the same: a big non-movable ball is secured in the lure head, a smaller one is in the tail (except for several Bet-A minnows) and two more balls of the casting system with magnet.

The “thinner” model has balls secured one above the other

Due to this design, the lures of these series cast well and quite accurately, but observing the action of the lures showed one peculiarity – if you use “aggressive” jerking technique with a spinning rod, the other ball of the casting system moves towards the tail, changing the action of the lure. This is a typical characteristic of Bet-A and Kalikana lures of bigger sizes. The lures move both vertically and horizontally. The pike likes such pullovers.

In general the lures can be called quiet. The balls of the balance system are a bit loose relative to its cross direction due to which the lure doesn’t emit a lot of noise. If you try to shake it in your hand, the noise is almost the same as Pontoon21 GreedyGuts 77 or Crackjack 78 have, or a bit bigger.

Subtleties of the series, or let’s talk about retrievals

These lures resemble each other in terms of their presentation, though having different actions. Bet-A-Shiner is faster and more aggressive, goes from side to side a bit more, also emitting more vibrations while it moves sidewards, more often showing its belly. Bet-A-Shad is quieter.

The basic retrieval is gradual jerking presentation created by the spinning rod tip, mixed with small pauses. You may jerk it a couple of times and then stop, you may do so 3-4 times. The passive pike likes this presentation, especially now, when it’s cold. For the same reason the lures move from side to side, gradually going forward, to return these shads within one meter of the retrieval is an easy task. Those who fish in small ponds know that the ability to act remaining at one place is a very useful quality of these lures in these conditions. For instance, I stopped taking on me the first two Bet-A-Shad modifications while fishing in small rivers at the beginning of the last summer – fish always bite at them… And from the point of view of professional angling, it’s more interesting to fish with them!

In summer, in warm water, you’d better use jerking style (short jerks without pauses). These lures also perfectly work in combination with spinning rods of fast action such as Pontoon21 Detonada DTS702MLXF or Taya TYS722L-M. To tell the truth, I tremendously enjoy fishing with these shads. Especially, I like downstream retrievals – the view is fantastic.

A second retrieval I’d like to recommend you is the combination of Power Cranking’а и Stop&Go. The technique is very easy: a couple of fast turns of a reel, during which the action of the lures is most powerful and then a distinct pause, 2-3 seconds long. Then you repeat everything once again.

A third one is a straight retrieval. If after twitching and jerking you forgot how to make a straight retrieval, I strongly recommend you to recollect it and try it. Surely, you can combine all the three types of retrievals. Please, try to remember what moment of this combination was the most effective. By doing so, you may find the coolest presentation.

I like calling Bet-A-Minnow Super Rolling Minnow, because if you use straight retrieval, the rolling action is manifested better than ever in comparison with other movements.

And I call Flat Minnow Kalikana Dun because of its high and thin body. It has both good rolling and wobbling actions. And I strongly recommend all the fans of pikeperch fishing with minnows to have a closer look at this model. And to my mind, it’s very attractive for pikeperch, moreover, it flies well.

The main type of presentation in summer (or warm winter) while you are fishing in ponds is classical jerking technique of average intensity. If you apply it, the minnow moves from side to side, dives and sometimes swim towards the surface, always showing its belly. And when water had been cold a couple of days before I started writing these lines, I had several excellent fishing trips, where I mainly used very slow twitching. A couple of jerks after which the lures swerved off a bit or dived like famous Suick jerk bait, and then a pause. The author’s choleric nature was rebelling against this tempo, but the author governed his temper.

Which do I like most: Bet-A-Minnow or Kalikana Dun? Difficult to say… 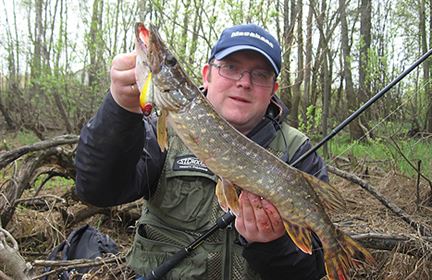 catching of a pike 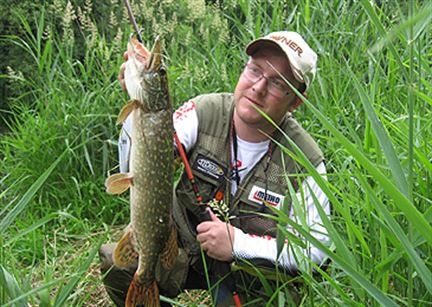 pike on a hardbaits 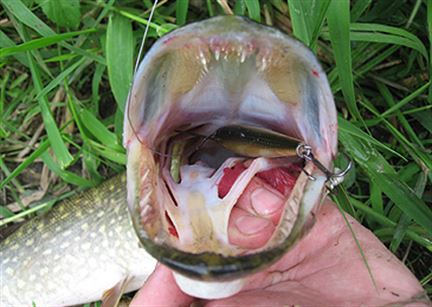 to catch on a hardbaits 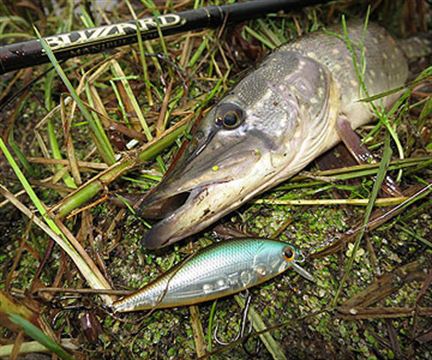