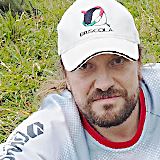 Anglers are familiar with Briscola feeder rods for quite a long time. Granito rods have proved themselves to be perfect instruments for lake fishing which are able to tame carps and bream even with thin lines. There are long-range casting rods within Marmo series, that are capable of sending the feeder, so to say, behind the horizon. But there were no rods for fishing in big rivers with fast streams. Only the most powerful Marmo rods made it possible to fish in such conditions and only partly. And finally, Grumo rods have appeared which were specifically designed for such fishing.

Externally the rods follow the traditions of the whole Briscola series: the have the same “slim” handle with a cork inlay near the reel seat and black EVA on the butt cap. Once again the butt cap underwent some changes. This time it’s made of compressed cork, as in Granito rods, but a conoid was changed to a rounded one. It looks quite brutal, but we’ll see later how it wears out. Grumo reel seat is not as elegant as in the previous models, it’s a simple one with an opened lower grip nut. Probably, it was made with an aim to make the construction more solid – the rods were initially intended for heavy loads on the reel and its holder. The rod blanks are quite thick at their base (GMH-424 is a great deal thicker at its handle in comparison with Marmo rod which has the same test) and have a distinct cone, you can feel its margin of safety and power. Grumo rods, as well as Marmo series, are equipped with guides made according to a new concept by Fuji which states that the first three guides form an inlet cone, and diameter of other guides doesn’t change a lot. The first guide has a special anti tangle construction.

However the diameter of guides is different in comparison with Marmo. The guides closer to the tip have been enlarged on Medium-Heavy ones, and Heavy rods have a considerably bigger inlet cone. The tips have also changed. They won’t do for Granito/Marmo series – their landing diameter is bigger. The guides on the bends are also bigger – it will be easier to take shock leader knots through them. The light model is equipped with tips of 2,3, and 4 ounces, the heavy one – 3, 4, 5 ounces. Undoubtedly, I was dying to see it in action. Unfortunately, it was quite difficult to go lake fishing now. If it’s possible to find a big river free of ice, but it would be rather hard to see at least one take. That’s why I decided to choose a small river near the city, where the water is warmer due to the sewage. The cast shouldn’t be very long (10-15 meters, no more) and the depth about a bit more than 1 meter, but the stream is quite strong, so sometimes you need a 100-gram feeder! Moreover, in warm water there’re quite a lot of big fish, which is active during the whole winter. So having arrived at the spot, I discovered that the recent rains has washed away all snow, thus increasing the water level, moreover the water got muddy. 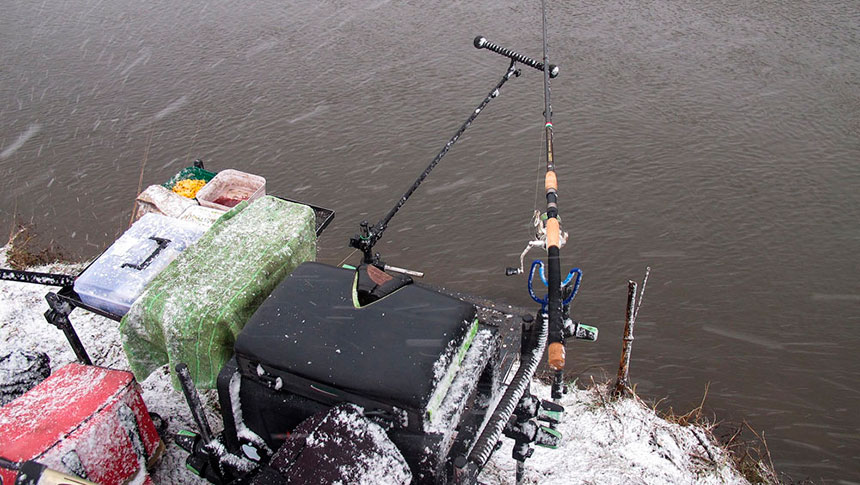 But I didn’t expect the fish to come out so soon, that’s why having 5 heavy feeders for a start, I put a smaller one cage and began casting every 12-15 minutes. One hour later I had a very confident take, and there appeared a good roach of 150 grams in my trap.

But, nothing else happened afterwards. And no tricks with feeding up could help. Only one hour later one more roach of the same size took. But even after that nothing else happened. Fish didn’t bite, but there was a lot evidence that they are active. It seems that the recent weather front influenced their mood. Weather was really disgusting – rain followed snow, snow followed sleet. And nevertheless there was fish. It regularly touched the line or sort of hit it, then a small carp jumped out of the water. And another feeble biting resulted… in a small perch, considering the fact that there was big fish at this spot. It proved that large river dwellers were extremely passive. I almost don’t use popular deep runners, but that was exactly the case when they could help. But alas, I didn’t have any.

Until that moment I used Medium-Heavy rods. I adjusted a second, heavier rod for the distance of 1,5 meters more and I used a 90-gram sinker instead of the feeder. And once again instead of the feeder rod I took this tackle and cast 1,5 meters down the river. Very soon another take came, but it just tore off one of the maggots. After some time another biting resulted in a small bream of nearly 1 kilo. That’s interesting. After fishing for some time in the same manner without any results, I took a feeder rod and returned the fed up spot. After several casts I caught only … a gudgeon.

Once again I cast the sinker down the stream. In a couple of minutes I had a fine slow take and a powerful resistance after hooking. Long rod and damper made of thick feeder gum gave me several seconds to detach the line from the clip. 0,2 lead could endure a lot, but I didn’t know the size of fish, nor did I know how well it was hooked, that’s why I released the line and loosen the friction clutch. After some time it was evident that carp is not very big though very glib, and some seconds later it was in my net. At first sight it was a bit more than 1 kilo. The rod appeared to be quite effective during reeling in this fish, it worked well at jerks, but didn’t give carp any “freedom”.

It was likely to catch one or two more following the same strategy, but it was getting dark, and our main mission of testing new rods was completed. And I decided to stop fishing, moreover there was a nasty turn in the weather. 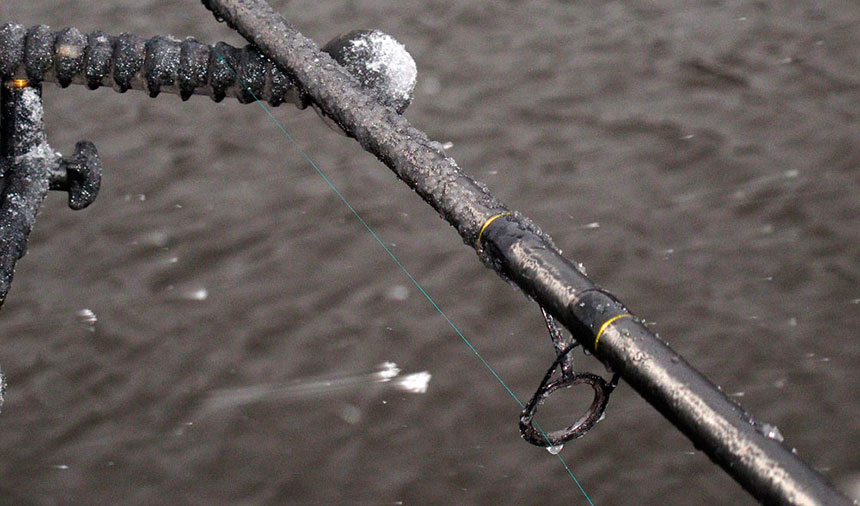 Surely, it’s too early to draw any conclusions, this rod can demonstrate all its potential only in big rivers while using heavy feeders and making long casts. But it’s already clear that new rods of Briscola series will easily solve all “fishing problems” which were impossible or difficult for tackle for the previous models. If you usually fish in big rivers with a strong current, pay your attention to Briscola Grumo rods, perhaps that’s what you’ve been looking for. 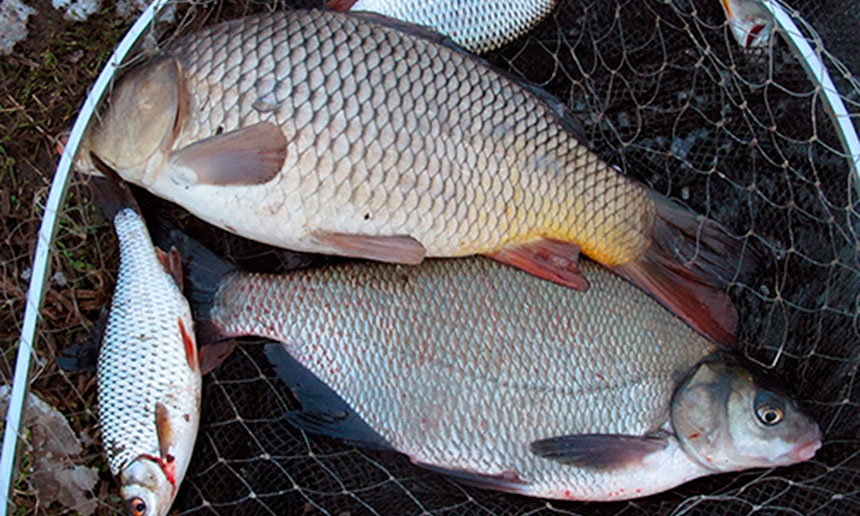 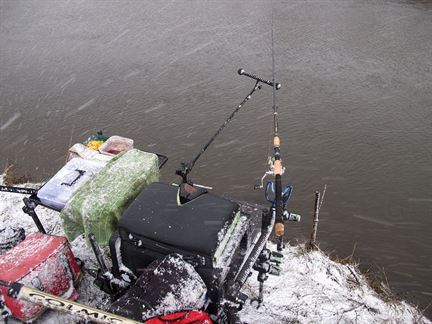 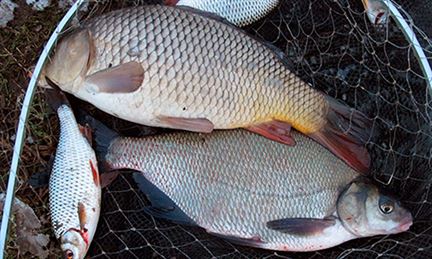