«From dusk till dawn» — time for successful fishing in hot weather

In summer, or even in September, sometimes, it’s usually quite hot in the central part of the country, which has a negative effect on the majority of predators. To use a spinning rod for your own good, you’ll have to apply a lot of efforts and stick to some rules which are difficult to follow.

1. You need to move quickly. So to say, the dog that trots about finds a bone.

This old rule of anglers using spinning rods is more than relevant in summer when the predator is mainly passive and the amount of fish that could tricked reduces. That’s why the more places we’ll visit, the more probable it will be to find active fish. Unfortunately, active search is not always possible. The banks of small rivers are very grassy and bushy. You’ll have to be in a very good health and to have a lot of desire, and almost none of us could boast of that. And a boat with oars won’t help you in big ponds, you need to have a motor, and that already means some money and also time.

In the middle and in the end of summer predators have a lot of food. There’re are lot of silly hutchlings, small frogs, chub and orfe can also eat different insects, as well as green weeds, in a word – buffet. And it’s becoming even harder to choose a working hard bait or a spoon, apart from the right action and presentation of the lure you need to experiment with colors.

In summer the water level is extremely low in many ponds, besides that the predator chooses hard-to-reach spots. Foraging fish and predators almost do not migrate, that’s why it occupies certain sectors in a pond which it manages to study well. To catch a predator, you need to approach a promising place very carefully, because careless movements and light sounds may frighten fish.

But, whatever the conditions or season of the year be, fish always bites well in the morning and in the evening. That means, you need to try fishing at this time in summer, but there’re some subtleties. The main one is a short night, which lasts 4-6 hours. To fish in the morning you have to get up very early, in some cases you need to go there in the evening, waste your time, as a result, you’ll have just like 3-4 morning hours, then heat comes. Almost the same situation happens when you fish in the evening. Using this approach, the waiting time of morning biting after evening one is just 5-6 hours in stead of 16 if we were fishing in the afternoon. More than that, it is at night that some fishes bite quite well which is not a sin to take advantage of.

Well, let’s suppose that you’ve decided to fish at night for the first time. For that you need to plan everything in advance: what fish it would be interesting to catch and meet some requirements without which night fishing may turn out unsuccessful and your desire to continue fishing with this wonderful method will disappear.

During night fishing you can’t do without a light. But you should use it only out of necessity. For example, if the treble hook of your lure got tangled with your braided line or there’s a need to change the tackle. While going along the river I don’t use it, but just carefully move, make one step, and, making sure that there’s solid ground, I shift my whole weight on this foot. But if you move along the unfamiliar bank or there could be some beavers’ burrows, watch your way and be careful.

Remember that the torch light might make fish cautious, because at night it can be seen from afar.

It is interesting that if you don’t use the torch, your eyes get used to darkness which is never utter.

It helps you while fishing because you have an opportunity to make out the opposite bank and see the circles on water where the fish is. You can’t do without waterproof trousers – your clothes will get wet after some time because of abundant dews on the grass.

You’d better take some company for a night fishing. Not only is this safer, but also more enjoyable because everything is gloomy at night. When they are alone, some people may fish for half an hour and then leave the pond, disappointed, fish not having entered.

One more important reason for night fishing to be in danger of failure is mosquitoes that’s you should take some repellents on you. It’s interesting that at sunset they are more active, and when the fishing starts, these “vampires” seem to be active all night. However, when the darkness comes, their activity significantly reduces and they almost stop impeding us.

One more important fact is that predator bites at certain periods, and at dawn and at night you can see it more clearly. Some species bite better at dawn, some – on the contrary in the pitch darkness of nights. That’s why let’s discuss some peculiarities of fishing for this or that predator.

I intentionally combined them, because their behavior at night is very similar. The lures are different, but not always. These predators bite quite well at dawn and at sunset, and it can be clearly noted in summer. They very hard to catch at night and it’s no use hoping for that. sometimes, they happen to be in the by-catch in average and large rivers if you use minnows with rolling action. For example, I would catch pike with Megabass Vision 95 more than once, Pontoon21 Cheerful 60SP-SR is also very good.

If you want to go fishing at night and catch some of these species at dawn too, you’d better focus on rivers. But you can also try fishing in places with ditch water, ponds and lakes situated near rivers might also be a good option. So, late in the evening and at dawn we fish for pike and perch in the pond, at night we go to the river and try to catch chub or pikeperch. And when the morning comes and predator stops biting in the river, you may return to the pond.

As far as the lures are concerned, it’s very important to choose the right depth according to the place of fishing. You should choose smaller lures for perch – 5-7 cm, and larger for pike – 9-11 cm, if there’re a lot of them both, we should opt for an average size – 7-8 cm. When the shallow waters are calm in the evening, don’t forget about small walkers as well as about shallow long cranks which were very good at pike fishing. For instance, Pontoon21 Preference Crank 63F-SSR fishes very well. As far as universal minnows are concerned, ZipBaits Rigge 56S, ZipBaits Rigge 70S, Pontoon21 Dexter Minnow 71SP work perfectly. And don’t forget about jigging, especially, if the pond is deep and its relief is interesting.

The perch has a very interesting behavior. Often it bites quite well in the evening, and as soon as the sun sets and there’s no light, it stops biting. Many people stop fishing at this moment, while they shouldn’t. In half an hour, when the shadows lengthen, it comes out for the last time for a very short period of time. And it’s quite possible to catch a large perch.

This red-finned beauty likes hunting at night. The largest fishes go to feed to the rift or the main stream, more or less free from weeds. And it is much easier to catch it at night than during the day. The thing is that at night 90 per cent of its menu are insects: various beetles and large moths. That’s way fish concentrate on the water surface, which means that SSR cranks are the main working lures. Also you shouldn’t doubt about the size of lures, fish react very well to 5-cm models. My leader is tried-and-true Pontoon21 FOP 38F and Pontoon21 Preference Crank 47F-SSR which was a welcome surprise. Pay your attention to the tackle, you should a more powerful one than during the day to have an opportunity to retrieve a large fish through the weeds or merely no to miss a good trophy.

The time when fish come out is also very interesting. In some cases the chub fishes well when the twilight comes, and then it continues biting at night. In other situations it’s on the contrary, at sunset I just swims and ignores any lures altogether. Now it will start biting in pitch darkness, but fish gives hints where to expect biting. And then early in the morning, when it is just beginning to get light, and fish leave to have rest, I don’t remember a single case when I ever managed to catch anything at that moment.

Naturally, this predator is one of you main aims while fishing at night. But you should go to bigger rivers to catch, it’s possible for it not be in small and average ones. Very often it goes to hunt to the rift not only at night but also late in the evening. In some places, strange as it may seem, the biting could be very weak at night, good biting ends when it’s completely dark. In other ponds fish come out during the whole night with certain periodicity. The pikeperch likes deep places and hard bottom especially with shells on it. If you managed to find the deepest place or small pits at the rift, you can be sure that sooner or later it’ll come there. Even if you the depth in this place is bigger than the general one by, let’s say, half a meter. You can find the predator on the edge of the stream or deeper places, for example, a pit or a creek. Apart from small minnows and shads which are very attractive in cold water, very often cranks help you out in summer that fish are just crazy about. I caught pikeperch with Pontoon21 TabaTao 50SR и O.S.P. Blitz 53 SR.

Well, I advise you to go fishing for predator at night, as well as, enjoy it, not paying attention to heat and hard fishing during the day! 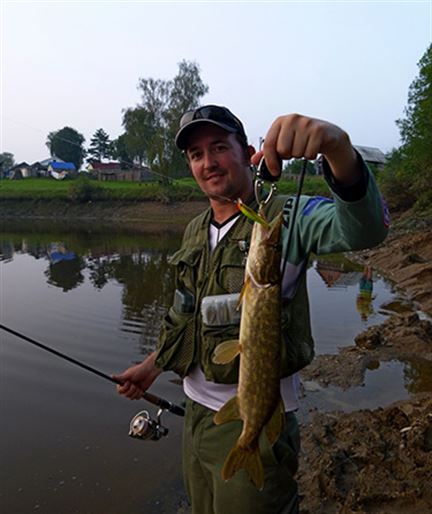 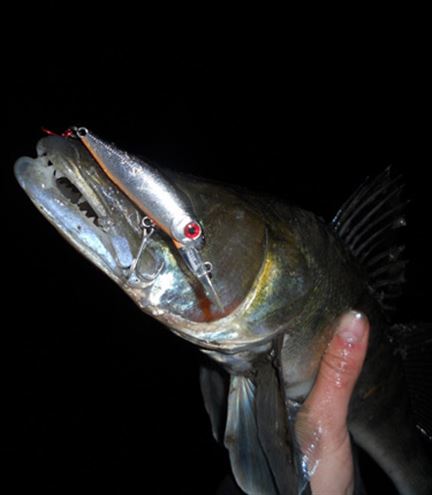 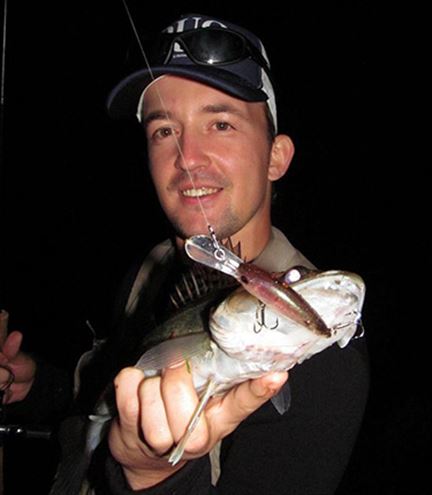 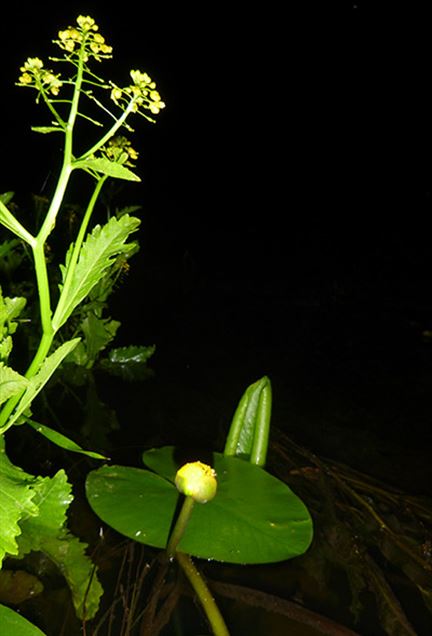