Some time ago Pontoon21 range of products was extended due to two new models of offset hooks and three types of silicone lures. The hooks are called ProtPoint and lures – HighTailer, Pillo and Ratta

And for the record: the length of Pontoon21 lures are measures when they are still folded.

The subtleties of the action

Recently I’ve begun to practice drop shot fishing in the center of the capital more often than before. There’re several reasons for that: to try something new; the fish are often passive in the center of the city; it doesn’t react to active fishing styles; moreover, fish dtay far from the bank. Drop shot enables to cast the lure far enough even in difficult weather conditions and, as a result, the lure acted for a longer period of time in front of predator, and the number of drop shot presentation can’t be calculated at all. In general, the drop shots are applied with the lures which are able to react to any rod manipulations. Among Pontoon21 lured for drop shots I like Ratta, Attirа and HighTailer most of all. Attira shad is the most flexible of all Pontoon21 silicone lures. It looks like as if it were created for masterly presentation in different styles of fishing: be it jig, microjig or drop shot. HighTailer has a harder body, but due to its prolonged construction and thin tail the lure is very attractive if you use jerking technique.

I also liked Ratta at active presentations. I’d like to point out, that this shad is particularly good if it is equipped with a jig head.

By the way, a lot of people wonder if it differs from the legendary Awaruna. As far as action is concerned, Ratta is more flexible, and it flexes better even under its own weight, the heel of the tail is more active, moreover, not only when you use jigging but also while you apply different rod manipulations. Ratta tail starts acting with sinker of lower weight. Once, I fished with Ratta (3,75 inches) with 1,7 g sinker at one very shallow pond – upon landing on water the action of the tail was very noticeable. Moreover, due to its smaller heel and slim body, ratta doesn’t belly out after casting and during retrieval which is sometimes quite important. Once again, these lures don’t compete with each other but complement each other.

Unlike Awaruna, during retrieval Ratta shad swings with its sides relative to its long axis (the so-called rolling). I think that this peculiarity is at least quite valuable.

If it is essential that you need a long range cast, be it a jig head or a terminal rig, it’d be reasonable to use prolonged lures – HighTailer, Attira or Ratta. Attira has the longest range of all the three providing the sizes are the same.

The weight of the lure

Let’s stipulate that we are talking about a spinning rod with the test up to 28 grams. The overwhelming majority of anglers using spinning rods think that you can cast a special sinker with the weight of 28 grams, but they forget about the weight of the lure itself… Well, there’re such spinning rods that can endure this overload. Although there’re those spinning rods which had better not to be overloaded. In this case the weight of the sinker can’t be more than, let’s say, 25 grams. And what if this weight shouldn’t be sufficient for casting or good retrieval in this or that condition? It would be reasonable to use a lighter lure of the same size, gaining a couple of grams expressed in lead. In the table after this article you may find weights of a number of Pontoon21 lures which I have now at my disposal. The smaller sizes are not so interesting, but the bigger ones are quite attractive.

Pay your attention to the fact that Awaruna 3’5”, for instance, is 3 grams heavier than the closest HighTailer 3,25”. If you change the models of the same size, it might give a couple of extra grams, which, in its turn, may lead to a longer cast and a different action with the obvious aftermath.

The speed of sinking

Once fishing in the of a small river with a very slow stream, I noticed that the time of landing became less when I changed Pillo 4” for Ratta 3,75”. Due to its small windage in water, Ratta shad was sinking faster in the slough.

A wide set of models of Pontoon21 silicone lures should be used in routine spinning fishing depending on the situation. If you need to reduce the speed of the lure landing or you fish in a shallow place, it would be reasonable to use lures of high windage – Jilt and Pillo. If you need to sink even deeper, you’d better use Ratta and HighTailer.

The lure without a high-quality hook is useless. Let’s talk about Pontoon21 ProtPoint hooks. There’re two series, including 14 sizes, amounting up to more than 50 lures… As you understand, it’s quite difficult to use all of them in the conditions of Moscow and Moscow region, that’s why for several moths I’ve been fishing only with Pontoon21 ProtPoint offset hooks.

According to the designers’ ideas, FS14 series is intended for heavy lures, and NS12 – slim shads and twisters, including worms. As you may see in the table and in the pictures of hooks with lures, to my mind this division is quite conventional.

Before Pontoon21 hooks, the main hooks I used were Red Owner, namely 5109 J-Light Worm Hook series. When I started using ProtPoint hooks, I quickly understood that they are smoother and, if you want, slick. On the one hand, it’s better from the point of view of hooking and biting, on the other hand – in places with a lot of rubbish you’d better hide the point of the hook in the body of the lure.FS14 has small offset hooks #10 and #8, and besides its size it has other wonderful qualities – the diameter of the eye can let the wire of special sinkers. And the bent Owner hook complicated the situation.

FS14 series has a classical form, that’s why the action of the lure is more predictable and comprehensible.

NS12 has also some pleasant surprises. Pay your attention to the fact that NS12 series hook often damages the eye of the fish. It proves that the lure equipped with NS12 hook is swallowed deeper by the fish, especially by perch, than Wide Gap offset hooks. The fish almost never hook off if you use them. I adore this model, if I fish for perch with edible silicone of different shapes and types

Moreover, NS12 series has a bigger point, which has a positive effect on your holding the lure

With the help of Pontoon21 Pillo 2,25” twister, equipped with Pontoon21 ProtPoint FS14 #2 offset hook, in one of the ponds I caught a wonderful pike of significant size. You may see it in my article  "Pontoon21 Gran Turismo GTS764MLF". Taking into account densely populated areas of Moscow region, this is definitely a surprise.

I’d like to point out that it’s impossible to find the necessary offset hook for some big lures, and that means that Pontoon21 hooks still have space for perfection. Well, let’s wait. 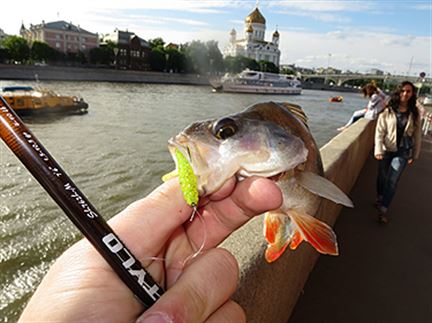 perch on a jigs 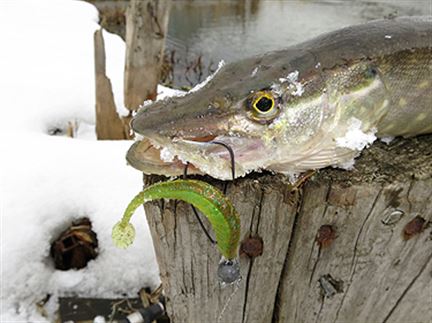 pike on a spinning 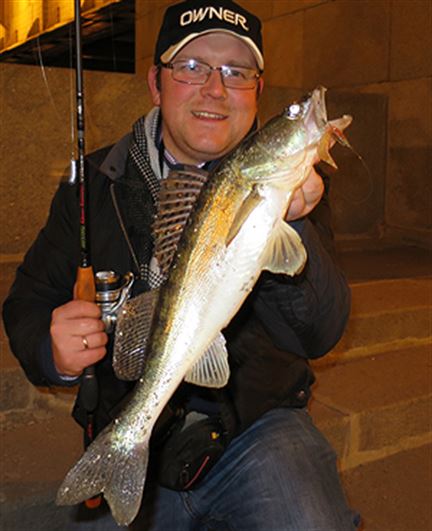 Catching of a pike perch photo 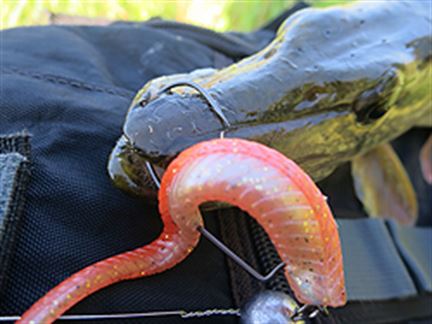 Pike on a jig photo
Język: