In the middle of September I’ve been to Lithuania at the filming of the program for video channel Anglers Zoom. You can watch the videos of this tour  at the channel, but while the impressions are still fresh, I’d like to tell you about it in this article…

Any fishing trip starts with preparations. This stage precedes every trip, be it a completion or a just a far journey. I select tackle and lures, depending on the common strategy of your trip, conditions and specificity of the fishing, as a rule, envisaging some particular set, though very rough. If you are going to fish for trout, you shouldn’t take any big pike lures, and vice versa. Thus you don’t need to take any shallow swimbaits, if you hunting for pikeperch with jig heads. So. You get the whole point… At the preparation stage, I didn’t understand what, how and where we are going to fish for. «Perhaps, that will be pike, or trout, probably, we’ll organize a river drift, and see salmon, there could be good chub, fishing in streams can be very interesting … well, we’re going to take it from there».

Under these circumstances we had to choose the tackle and lures for different conditions, I’ve decided to take a little bit of everything so that I could be ready for any situation. Looking ahead, I’ll tell you, that I had made the right choice, because there’re a lot of different situations. We travelled across the whole Lithuania from the Belarusian border to Klaipeda, staying overnight in a new place every day. We’ve been catching different species in the absolutely unpredictable conditions, that’s all the tackle I took on me I had a chance to use.

Out of all my fishing trips, I think this one turned out be very rich in changing our positions, ponds, fishes, pictures around us. That’s because our Lithuanian friend Gediminas who organized this trip and accompanied us everywhere, is also sick with fishing, in a good way. We want to thank all our Lithuanian friends for this trip!

I’ve been selecting my sets for a long time, thinking it over, I think that I should tell you a bit about my tackle and the purposes they were intended for.

ANRE'S / PALMS Egeria Area ESGS-60UL, 1,83 m, 0,8–3,5 g. This is a new spinning rod for me, and it turned out to be ideal in a small trout river, where you need accurate casts of small lures. When I was writing this material, I’d already been to several trout competitions with this rod. And even if the river is much bigger, as well as the fish, it works perfectly.

Pontoon21 High Point Stylo SL682XUL-M, 2,03 м,0,5–5,0 г. I won’t be saying a lot about this rod, I’ve been using it for many years during simple fishing trips and competitions. Its definite and indisputable purpose is fishing for trout, which I intended to catch more than anything else.

Pontoon21 High Point Stylo SL702UL-T, 2,13 м, 0,8–7,0 г. It’s one of my most favorite universal rods. It perfectly copes with different types of lures, be it a spinner or a minnow. I think that this spinning rod should always be in your arsenal when you are supposed to fish for predators with light lures.

Pontoon21 High Point Taya TYS712ML-T, 2,15 м, 3,5–14 г. It’s very universal within its test, or even more. It is able to retrieve even big spoons and hard baits. It was very probable, that we would fish with average hard baits in rivers, that’s why it was immediately packed into the case.

Megabass Destroyer Blizzard BBLS832MLXF, 2,52 м, 4,0–18,0 г. It’s a universal rod, which I take on me in different fishing expeditions. It enables you to cope with lures of different tests and types without any difficulties. It’s equally comfortable to use it with jig heads and spoons.

ANRE'S / PALMS Molla MGC-73MH2F, 2,21 м, 10–28 г. Out of all this one is the most powerful, equipped with a multiplier reel, it’s intended for pike. There was a piece of information that we might go to a lake to fish for pike with big hard baits. Unfortunately, we didn’t’ manage to go there, but the spinning rod came in handy when we fished with the Terminal rig with two ounces at the Curonian Lagoon.

Drifting along the Neris

Just having arrived, we rushed from one place to another. As I’ve already told you, our friend Gediminas managed our whole trip. And without losing time, he’s decided to get down to fishing by drifting along the Neris. Our first meeting with the river happened in the Lithuanian capital, where I saw the river in stone bonds. And the river was interesting even there from the point of view of fishing, because salmon go there to spawn, and while the ban on fishing is not yet active (not until 15th of October), a lot of anglers are trying to catch this fish right in the city center.

Then we had to get acquainted with our friend Gediminas – our guide in this drifting, then take the boat and launch it. Until the very last moment, I didn’t even imagine how we are going to cover the distance of 60 kilometers. We were told that the boat would be good… Though after drifting along the rivers of the Kola Peninsula, any boat would seem all right. And that was like a superboat. This was for the first time that I’d fished from the real American boat, specifically designed for drifting along fast and stony rivers. Everything in it was so comfortable that both catching and drifting was just a pleasure. There was even a door in the boat.

As our guide ensured us, there was just the only one in Europe.

It was interesting to observe how it was launched. As long as there were few slips in the river, we just arrived at a comfortable steep and dragged to the river. The drift started after midday. But it wasn’t so important. We turned out at the most beautiful river, surrounded by the wilderness and excited anglers.

I took three rods on me to adapt to the conditions I was yet to learn and to work with different types of lures without any difficulties: Pontoon21 Stylo SL702UL-T, Pontoon21 TYS712ML-T, Megabass Blizzard BBLS832MLXF.

In the beginning, having experimented with different lures, I caught more fish with average spoons and sinking hard baits with the size up to 70 mm. that’s why I used Taya TYS712ML-T more often. The fishing turned out to be difficult. After drifting I had four fished in my haul. The biggest was asp which I caught with ZipBaits Rigge Flat 70.

There were a few more bites, one big asp even tore off the lure. But in the places we were passing through there must be more fish. And they were still there, but for some reasons they refused to bite. Perhaps, because of low water level or abnormally hot summer.

In spite of the beauty surrounding us and the potential of many places we could almost feel, the water was calm, the fish were passive. We saw just a couple of splashes. Well, you can’t predict anything. It is what it is. But the mood of fish strongly depends on weather. And our success depends on their mood.

Salmon are said to appear in the river, the rest of the fish hide and don’t bite. As Gediminas says, they’ve already started to come out, and we might come across them. The fish is big, you can see clearly a 10 kilo salmon. And if you noticed this fish, it’s very probable that you’ll catch it. We didn’t notice anything, though we hoped to the last. But salmon is a mythical fish, it was more realistic to fish for chub, moreover, according to some people, there are a lot of them in the river, and drift fishing for chub is known to be the most effective one. Our boat was slower than the stream, the banks and shelters proved that chub were there. But in spite of my accurate casts, unfortunately, I didn’t catch anything.

Sometimes it was pouring with rain, which made fishing even more difficult, but didn’t spoil it. Could some rain prevent me from enjoying nature and fishing?

In a small river

The next stage of our journey was fishing for trout in a small river near the central park. There I made use of ANRE'S / PALMS Egeria Area ESGS-60UL spinning rod which was very comfortable to use with light lures. It was their combination with ValkeIN Hi Burst spoons. By the way, these lures were a discovery for me. Sometimes the trout wasn’t very big, but even they didn’t miss the lures and tried to bite at these small spoons.

I was surprised that this small river was situated just near walking routes. There are stairs in some places, and everywhere there are paths. People walk, have a rest, walk their dogs, there’s no rubbish, but there a lot of fish. A dream! Yes, it wasn’t big, but it was such a pleasure to catch fish with ultra-light tackle near the big city. 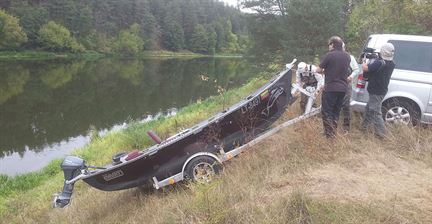 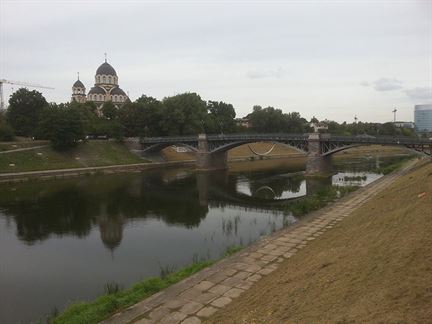 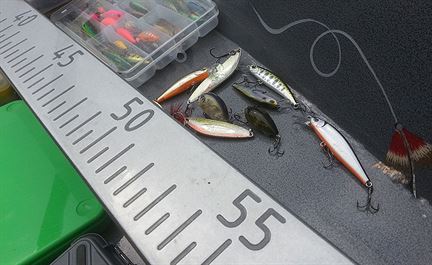 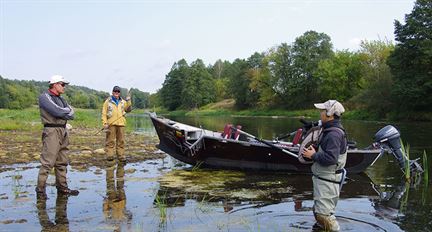